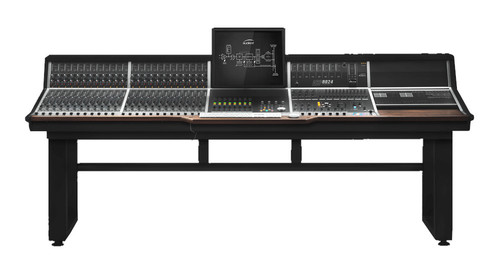 Built on the success of the legendary ASP8024 and the history of its designer David Dearden, the ASP8024 Heritage Edition reimagines the original’s classic design with new enhancements and features.

Audient uses the same Class-A mic preamp design in all their products, so you can be confident you’ll get professional quality sound. Considered one of the most versatile mic pres available, the Audient mic pre is known for clean and transparent sound.

Tailor your sound with the variable mix bus on the ASP8024-HE. This variable output mix bus (RETRO IRON) is based on two consoles from David’s 1967 work at the renowned Advision Studios in London, adding punch and vibe to the console’s mix output. RETRO IRON uses an American-style output amplifier, classic through hole components, and a British output transformer to supply Low Bump and High Lift EQ.

The EQ designed by Dearden offers two fully parametric bands spanning from 40Hz to 20kHz, offering a powerful and punchy sound. These two bands are flanked by low and high shelving EQ bands (with a minimal signal path). When combined with the parametric EQ these low and high shelving EQ bands make the ultimate sculpting tool for adding weight and air to your source. A rare feature of the EQ is that it can be split across the short and long faders.

The mix bus compressor in the ASP8024-HE is based on technology from the 80s and 90s with improved circuitry and a new gain reduction VU meter. This gives you the best of sounding like a classic record while getting the technological enhancements of more modern designs.

BASS EXPAND is a feature of the mix bus compressor. A new high pass filter in the compressor’s side chain, this tool can tighten up your mixes and add punch without destroying the low end. This is a particularly helpful tool for bass-heavy productions.

Overall inline architecture lets you start building your mix as you’re tracking. Create separate record and monitor balances on one channel strip by using the long and short faders, while still being able to access splittable EQ and aux sends.

The modular design of the ASP8024-HE helps you fit the console into your current setup or adapt as the gear around it changes. An impressive variety of connections allow the ASP8024-HE to become the hub of your studio no matter what you’re working on.