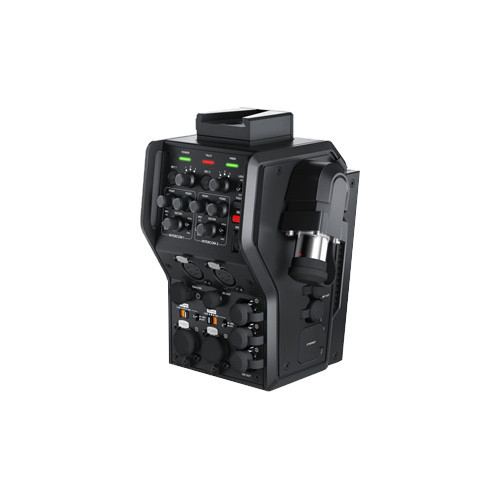 The Blackmagic Camera Fiber Converter and Blackmagic Studio Fiber Converter convert standard television industry connections for video, audio, power, talkback, and tally into a single SMPTE fiber optic cable. This allows cameras to be placed up to 2 km away from a studio or outside broadcast truck using a single convenient and incredibly durable cable. The Blackmagic Camera Fiber Converter also adds familiar broadcast studio camera controls to the rear of the camera, plus additional connections so you can use it with the talkback systems and switchers you already have. The Blackmagic fiber converters feature 12G-SDI and are designed to work with all HD and Ultra HD formats up to 2160p60. Now you can transform professional cameras such as URSA Broadcast and URSA Mini into a complete professional studio camera with all of the features you need for high end work!

If you’re working in a studio or out at a large sporting venue, you often need to place cameras far apart. While SDI connections are common, the limited range of SDI makes it hard to use it over long distances. Traditionally, you would need to run multiple cables and expensive extenders for power, talkback, tally, video and audio. This makes set up incredibly complex and increases the chances of a technical problem. Now you can solve this problem by converting all essential connections and power into a single convenient SMPTE fiber cable that can run incredibly long distances. That means cameras can be placed anywhere and connected back to broadcast trucks parked outside of a venue or back to a central control room in a studio. Best of all, SMPTE fiber is a global broadcast industry standard so you can use cables and connection points that are commonly available. Blackmagic fiber converters are also affordable, so traditional broadcasters, new web broadcasters, AV producers, houses of worship and educators can all use the same high end broadcast technology!