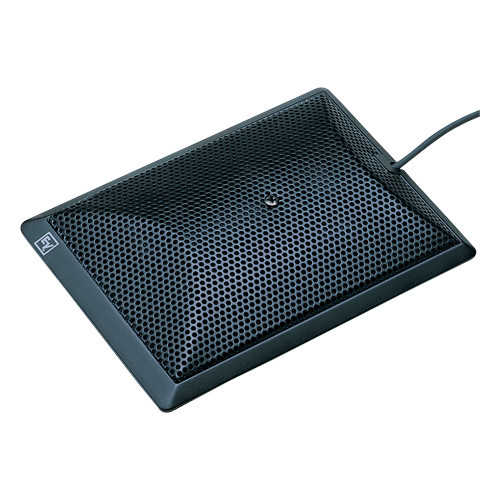 A boundary microphone with “half-cardioid” pick-up pattern and built-in equalization, the RE90B is ideal for video and teleconferencing systems, boardrooms, classrooms, or houses-of-worship. Delivers every word fully and naturally.

The Electro-Voice RE90B and RE90BW are part of the RE Series Architectural Microphone Group, and are highly-shielded from RFI/GSM thanks to EV’s exclusive RF Shield technology. The RE90B is a full-range condenser microphone designed to be used for surface mounted applications such as distance learning centers, video conferencing systems, teleconferencing systems, and sound reinforcements. The polar pattern of the RE90B is half-cardioid (half-space cardioid) to promote good gain-before-feedback and suppress ambient noise. All boundary type microphones operated on a flat surface are subject to an increase in sensitivity of the microphone with increasing frequency; this is called the baffle effect. To counteract this effect, the RE90B has been designed with internal equalization to give the RE90B a flat sensitivity response. The RE90B is designed to be powered by an external 9–52 VDC phantom power supply (DIN 45 596). The RE90B microphone is encased in a heavy-duty zinc die cast body protected by a strong, perforated steel screen. The body of the microphone is designed to provide two distinctive functions. First, the case is electronically isolated from the surface that it is placed on by virtue of the rubber friction pad and the internal fiber washers when permanently mounted. Second, the microphone’s miniature cable can be routed directly from the rear of the microphone, or the cable may be directed from the bottom of the microphone though the table top without exposing the microphone cable. The microphone cable is connected to the microphone by a pilfer-resistant internal terminal block. For permanent installation, a drilling template is provided. The RE90B’s body is designed as a low-profile housing. Both microphones are shock mounted through a combination of a heavy diecast case, a rubber nonslip bottom pad, and internal padding of the microphone and printed circuit board. This combination of isolation minimizes the mechanical coupling of surface vibrations to the microphone. For the RE90B, a 3.0-m (10ft.) black miniature shielded two-conductor cable is provided with a male XLR-type connector. The RE90BW is provided with a 3.0-m (10ft.) white miniature shielded two conductor cable with a male XLR-type connector.