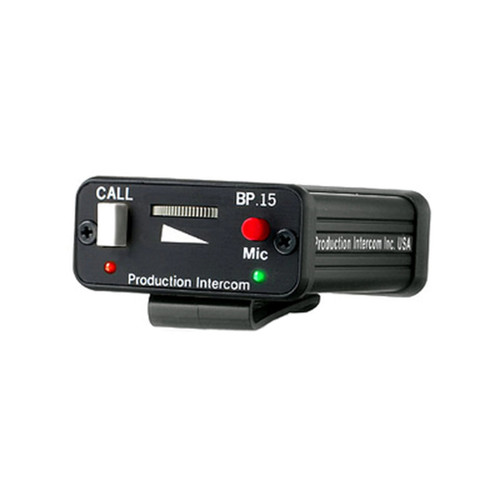 The BP15 continues Pro Intercom's tradition of superior performance, now in a tiny package, 1/7th (0.15) the size of the BP-1 (by volume). All the functions of a full-sized belt pack are retained. The signal button and the mic. On/Off button are shaped differently for easy recognition by touch, in the dark. Two LEDs are mounted, one to indicate signaling (red, bright) and one (green, low output) to indicate that the microphone is On.

The volume control is a thumbwheel, again reducing the likelihood of accidental damage. There are two recessed controls. One controls 'sidetone'--the sound of your own voice which you hear in your own earspeaker. The second recessed control adjusts the sensitivity of the microphone in put circuit to allow for different out puts of dynamic and electret microphones. The microphone input circuit includes a limiter which keeps the microphone input from being over loaded, causing distortion. The amplifier circuit delivers a crisp, clear signal to the earspeakers for excellent speech recognition, but with a wide enough frequency response to minimize the possibility of ear fatigue during a long performance.

Miniaturization has its costs. The size will not accommodate the conventional three XLRjacks on the bottom (rear) panel. The 4-pin head set jack had to be retained but we have substituted a miniature XLR-type jack for the other two. The BP15 comes with a cable constructed from a length of our steel re in forced cable with the miniature plug on one end and a 3 -pin female XLR on the other. A second cable is available with the miniature plug on one end feeding into a Y with a male XLR on one leg and a female on the other for looping onward to the next station in the system.