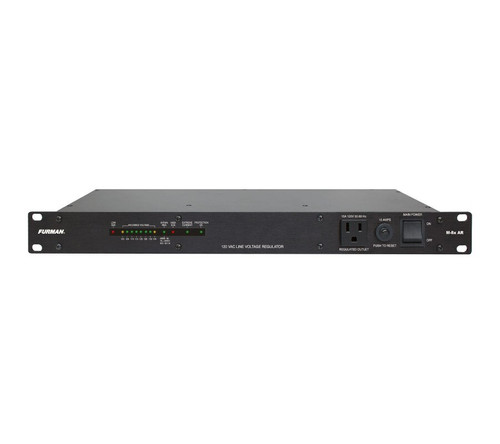 The Furman M-8x AR Voltage Regulator is intended to protect sensitive electronic equipment from problems caused by AC line voltage irregularities such as brownouts, sags, and over-voltage conditions. Such irregularities can cause audio tonal changes, digital equipment malfunctions (such as loss of MIDI programs or other data), or in extreme cases, permanent damage.

The M-8x AR includes special circuitry to sense over and under voltage conditions and either regulate or disable the output before damage can be done to connected equipment. Please refer to the specifications for the exact voltages at which shutdown occurs. When the input voltage falls outside the regulation limit, the power will cut off. Power will automatically be restored when the condition has subsided. The two red LEDs labeled “EVS” indicate a protective shutdown condition.

The M-8x AR includes a special ECS circuit to detect an extreme over-current condition and shut down the outlets before damage is done to the M-8x AR or your connected equipment. The ECS circuit has been designed to detect high speed and high level currents and will ignore low speed / low current transients, such as amplifier inrush currents. When an ECS condition has been detected, the M-8x AR will shut down outlets and illuminate the red Extreme Current LED.