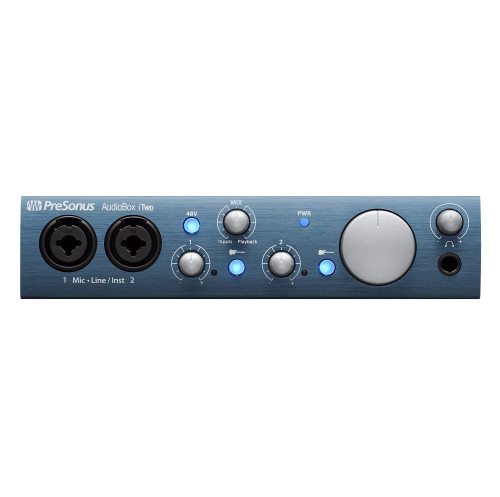 The AudioBox iTwo audio interface and its software library make recording your compositions and tracks easy! Record in stereo on your iPad with free Capture™ Duo or record up to 32 tracks with affordable Capture for iPad. From there, you can wirelessly beam your iPad tracks to our award-winning Studio One® recording and production software for Mac or Windows for editing and mixing—or you can do the whole project on your laptop with Studio One. Either way, the AudioBox iTwo proffers all the tools needed to record on the road and in the studio.

The USB 2.0 bus-powered PreSonus AUDIOBOX iTWO AUDIO INTERFACE is an excellent choice for mobile musicians, sound designers, and podcasters. With two combo mic and switchable line/instrument inputs with a high-performance mic preamplifier, you can record synths, guitars, and anything you can capture with mics. The AudioBox iTwo is compatible with Mac®, Windows® PC, and Apple iPad® and is bundled with powerful, easy-to-use recording software, making it a complete, multiplatform recording solution.

STUDIO ONE software integrates all the tools you need to go from inspiration to final production. Record, produce, compose, mix, master, and perform all from a single, intuitive application. The standard for end-to-end production, Studio One is the DAW that does it all.

CAPTURE™ DUO for iPad® offers professional-quality recording to the Apple iPad. Developed by the same engineering team that brought you our Studio One® DAW, Capture Duo lets you record and play two tracks with up to 24-bit, 96 kHz fidelity. Although designed primarily for sound acquisition, Capture for iPad supports essential event editing for basic cleanup, and editing audio is simple and intuitive.

The M7 CONDENSER MIC captures musical details, harmonics, and subtle nuances that would get lost with dynamic mics. Large-diaphragm condenser microphones tend to “warm up” a sound, making them the go-to microphone for recording vocals and a wide range of instruments.

HD7 HEADPHONES deliver natural, warm, clear sound and take advantage of a patented, semi-open sound chamber to deliver exceptionally deep low frequencies. No matter why, where, or how long you use them, these headphones are built for comfort and durability. Whether you’re monitoring, tracking, mixing, or just listening for pleasure, you can expect impressive sonic performance from the HD7.