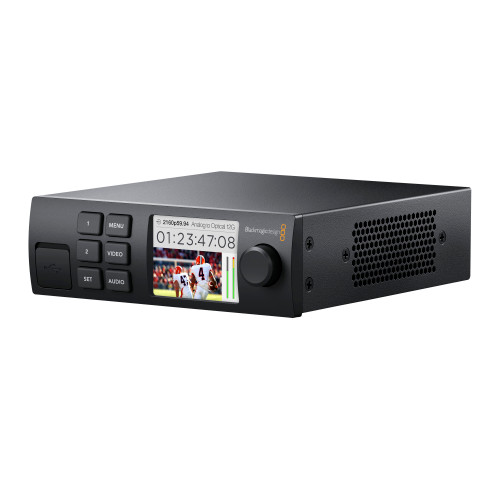 Teranex Mini converters are often used for broadcast, postproduction, and professional video applications. With this optional smart panel, it is easier than ever to adjust and keep track of converter settings. Simply replace the existing front panel on any Teranex Mini converter with this smart panel. Features of the smart panel make it a great choice for working without external monitors, and when using multiple converters.

Color LCD screen on the front panel makes set up easier and displays what video is going through each converter. Spin dial and six control buttons include a menu control for adjusting settings, browsing menus, monitoring conversions in progress, monitoring audio levels, verifying timecode, and verifying the video standard being converted. Color control with 3D LUTs is part of the converter already, but two separate 3D LUTs can be loaded from the smart panel.

Enjoy easier control of your converter by adding the Teranex Mini Smart Panel.