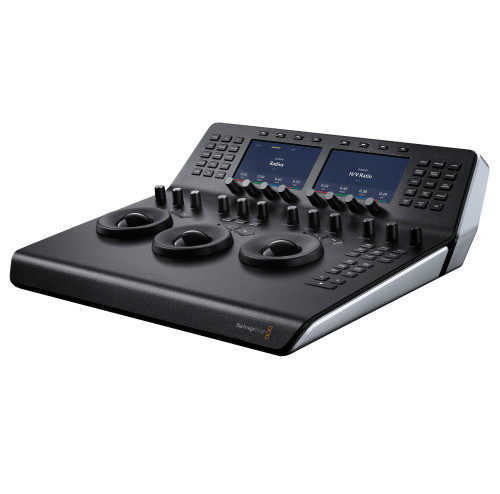 Use the DaVinci Resolve Mini panel for convenient switching between editing and color grading. Features include three high-resolution, weighted trackballs and 12 control knobs to access color correction tools, and 18 keys to access commonly used grading functions and playback controls. The Mini panel is recommended for freelance artists who need all the capabilities of a panel made portable.

Layout is similar to the Mini panel, making it familiar to use if you started on the Mini. Control knobs are divided into four sections for luminance, contrast, detail, and saturation. Luminance and contrast both adjust contrast, with luminance able to adjust contrast in specific areas of the image. Detail and saturation work similarly; both alter saturation with detail being applied to designated areas of the image.

USB Type-C and Ethernet interface is compatible with Mac, Windows, and some Linux systems. A USB 3.0 Type-A to USB Type-C cable is included for use with systems limited to USB Type-A connectors. The panel can be powered from an AC power source, 4-pin XLR connector, or PoE. Connected laptop or computer must be running DaVinci Resolve 12.5.5 or DaVinci Resolve Studio 12.5.5 or later for the panel to work with Resolve.

Adding to the capabilities of the Micro panel, the DaVinci Resolve Mini also has two LCD screens to display menus or parameters of the tools you’re using. Access more precise control with the Mini’s eight customizable soft knobs and dedicated feature buttons to change tools without using your mouse.

When the control panel is small enough to take with you, color correction on location is always possible.