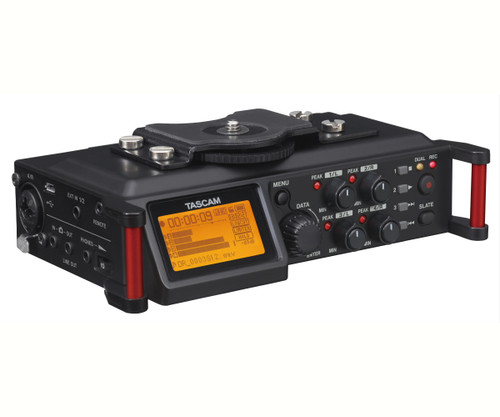 Tascam’s DR-70D is a 4-Track Recorder built to meet a wide range of production audio needs. Featuring premium microphone preamps, plenty of connectivity, and a ton of other professional functions in its compact build, it is ideal for a wide range of videography applications, from professional and indie filmmakers alike to TV producers, journalists, advertisers, documentarians, and everything in-between.

Compact and versatile, the DR-70D can be mounted above or below a camera. Two built-in mics to capture sound on-set, while four balanced XLR mic inputs with phantom power are included to enhance your audio coverage.

Microphone preamps convert mic-level signals to recordable levels, meaning they play a huge role in the quality of your final product. The DR-70D recorder boasts HDDA (High-Definition Discrete Architecture) mic preamps. These preamps include 64dB of gain for quiet performances, and all four inputs have individual gain controls. In addition, a NE5532 op-amp is included due to its outstanding effect on audio quality.

When it comes to the need for flexibility during a video shoot, connectivity is key. Four XLR/TRS inputs are incorporated into the DR-70D, while its 4-channel design enables combinations of shotgun mics, lavaliers, and the built-in stereo mic to be recorded individually. Channels 1 and 2 can be set to stereo input and channels 3 and 4 can be set to the built-in mics, making a variety of mic configurations possible.

Each input has a limiter and low-cut filter for volume control. Dual Recording mode records a second copy of your audio at a lower level to prevent distorted takes. Other features include a slate tone, low-noise buttons, camera, and headphone outputs, and standard AA battery power.

The DR-70D includes an A/D converter that ensures quiet, clean audio recording. Audio resolutions up to 96kHz/24-bit are supported. Capture your tracks to SD card, SDHC, or SDXC media – up to 128GB cards.