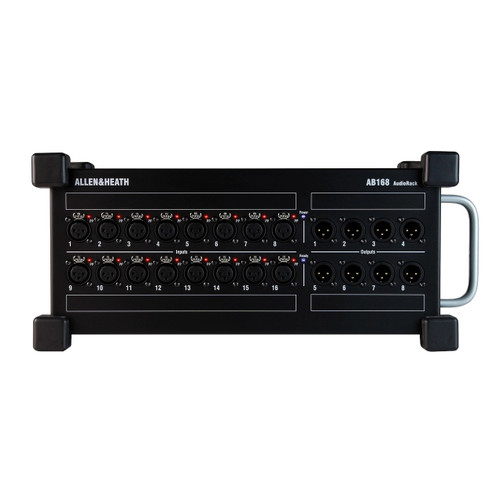 The AB168 Portable Remote AudioRack from Allen & Heath is a 48kHz audio rack specifically engineered to be a stage-ready solution for any live sound application. Boasting enhanced I/O, versatile compatibility, and capable of daisy-chaining for easy scaling of your sound system to fit the size of your venue, the AB168 is built with heavy-duty components that make it durable and travel-ready. This audio rack has been designed for compatibility with Allen & Heath’s Qu series digital mixers, Avantis and SQ mixer series, as well as the AHM-64 audio matrix processor (all compatible external equipment sold separately).

Fitted with 16 microphone preamps that feature Phantom Power indicators, as well as 8 XLR line outputs, the AB168 is powered by Allen & Heath’s proprietary dSNAKE protocol. Take advantage of its I/O to connect it to any compatible system, using a single CAT5 cable to position the unit up to 100m (approximately 328 feet) away from the mixer.

Using a secure dSNAKE Ethercon port, the AB168 connects over a CAT5 cable to your mixer or AR2412 AudioRack. Expanding your options, the AB168 also offers a second EtherCon port, allowing you to daisy-chain to other AB168 units or connect to a ME personal mixing system (sold separately). Synchronizing your system is a breeze due to the AB168 AudioRack’s automatic updates to its firmware.

The power and versatility that characterizes the AB168 extend to its external build. Its rugged design includes rubber bumpers that protect it during transportation, so you can move it around the stage without worrying about wear and tear. Place it directly on the stage floor during performances, or use its optional rack mounting kit to permanently install it in your setup (sold separately).

Combined with its optimized durability, the AB168 is surprisingly light, weighing in at a little over 10.5 lbs (4.8 kg). Add to that its sturdy carrying handle, and this audio rack is a great choice for uses that need both rugged quality and maximum portability.