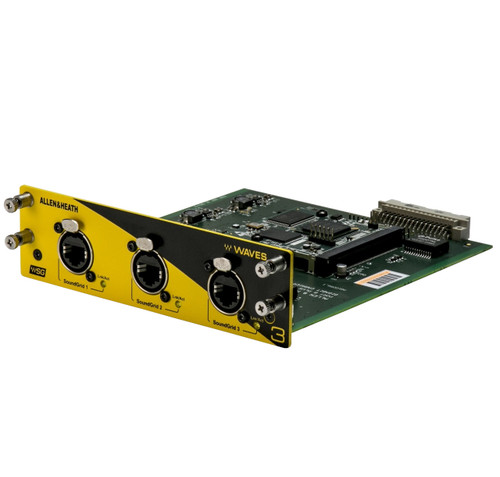 Add increased functionality and more tools for your creativity when you incorporate the Waves V3 Audio Networking Card (M-DL-WAVES3) to your sound setup. One of several audio networking options designed to fit a dLive or Avantis system’s I/O Port, this networking card from Allen & Heath is an audio networking option card for professional applications.

An ideal tool for sound engineers or installers, the M-DL-WAVES3 card equips you for plugin processing multitrack recording, mic splitting, and audio distribution applications, as well as offering a convenient solution for recording 128 trakcs of 96kHZ audio directly to your computer (compatible with Mac/PC). This card gives you 128x128 channels with selectable 48kHz or 96kHz operation. Interface your dLive of Avantis system to the Waves Soundgrid networking platform to access premium functionalities and professional-grade features. Use a single CAT cable to easily connect your gear and get to work.

SoundGrid is an Audio-over-Ethernet protocol developed by Waves specifically for real-time professional audio applications. SoundGrid protocol is compatible with any other brand that uses this protocol and makes it possible for you to use Waves Plugins at very low latency by employing standard Gigabit Ethernet networks (as opposed to a USB connection). Access your plugin processing via a computer (natively) or via one or more dedicated Waves servers. SoundGrid also allows you to interconnect any other device that is SoundGrid-enabled. It also enables you to use a PC/Mac Ethernet adapter as a 64x64 audio interface.