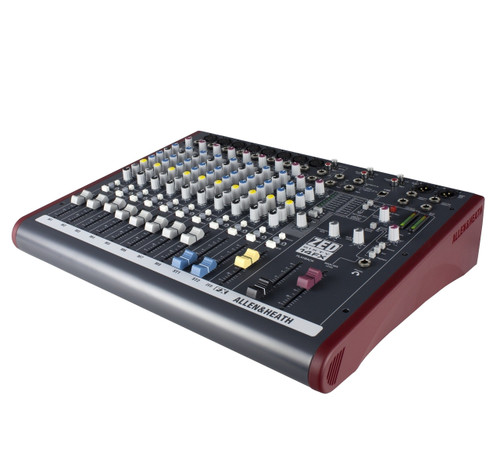 The ZED60-14FX Multipurpose USB Mixer with FX from Allen & Heath gives you professional sound and features ideal for both live performances and studio recording. This mixer’s core feature is the premium quality 60mm faders that add intuitive, tactile control over your mixing experience

Leave your mark on your music with the ZED-10FX’s premium collection of 16 time-delay effects. Laid out for intuitive, streamlined navigation and editing, use 3 buttons with 9 display LEDs to craft your sound with time delay, reverb, and more.

Guitarists can dispense with the extra DI box and plug their instrument directly into the ZED60-14FX using its designated high-impedance inputs (inputs 3 and 4) that are compatible with normal line levels or the low-level inputs from guitar pickups. The resulting sound replicates classic guitar or instrument tube preamps. Use the gain “Boost” switch for instruments with very low-level outputs.

Built into the ZED60-14FX is a responsive 3-band, sweepable mid-frequency British EQ design at uses MusiQ. Its optimized slope (Q factor) allows you to precision-equalize individual instruments in your band. This EQ is acclaimed for musicality even in the most extreme applications, with controls that have been precisely calibrated for a smooth adjustment.

The ZED60-14FX includes DuoPre pre-amplifiers that use a 2-stage design and carefully controlled gain in each stage. These preamps boast a gain range of 69dB and reliably-even gain control when amplifying a signal from the mixer’s XLR input. Most of the gain comes from the first stage, which keeps unwanted noise to a minimum. Plug line level signals into the preamp’s second stage using the line input jack socket, which results in less noise when using line input or when matching a higher input impedance.

The ZED60-14FX comes with configurable USB audio inputs and outputs. No need to install external soundcards—just plug in a USB lead and select USB routing on the mixer to get started right away at your recording. This feature gives you CD-quality audio to and from your Mac or PC, while switches and connections via the mixer’s jack socket terminals offer a variety of send/return options. Rounding out the ZED60-14FX’s connectivity options are 2 stereo inputs for MP3/CD players or keyboards, as well as professional XLR stereo outputs and a versatile monitoring section that lets you plug in headphones and/or speakers.