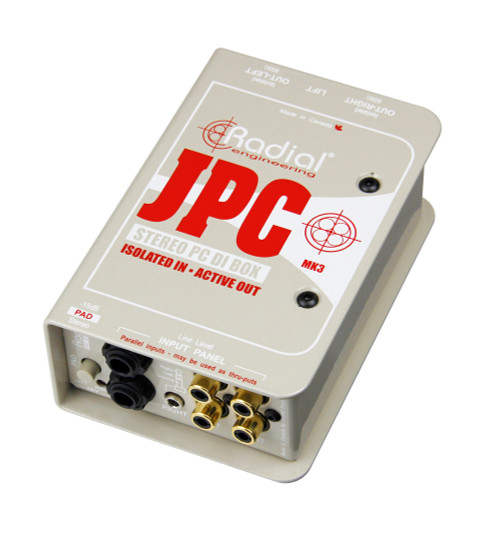 The JPC is an analog stereo interface designed to help solve the hum and buzz problems commonly associated with connecting a computer or consumer playback device to an audio system.

The JPC is a stereo direct box that is easy to use with practically any consumer electronic device. It utilizes active buffers and transformer isolation to create a hybrid circuit that blocks ground loops and reduces system noise, along with AC blocking capacitors to prevent any audio system noise from bleeding back into the computer. The choice of ¼", RCA and 3.5mm input connectors make it easy to interface with all types of unbalanced audio sources such as computers, smartphones, and tablets, and the outputs are XLR balanced mic level to feed snake systems and PAs. Powering the JPC is accomplished via 48V phantom from a mixing console, allowing the JPC to be used in concert environments without requiring an external power supply.