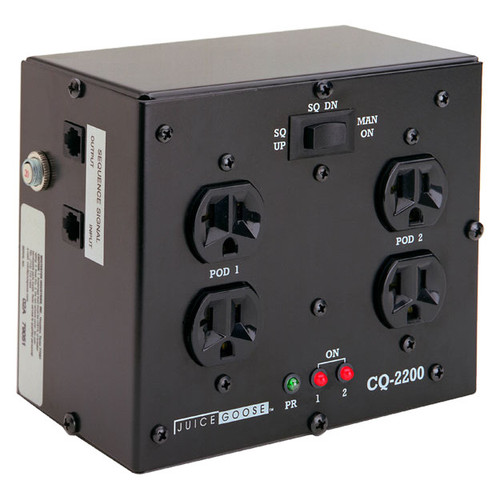 When is more than one sequence event needed? Whenever it's a good idea to reduce the start-up current surge on a single circuit. That's why the CQ-2200 has 2 sequence events...and why it's so popular. This really is an expanded version of the CQ-2000.

Some amplifiers may be able to operate in tandem on a single 20 amp circuit, but would overload the circuit if turned on at the same time. The CQ-2200 stages the turn-on thereby reducing the required electric power service.

For smaller systems the CQ-2200 can act as a stand alone sequencer, activating front end equipment on the first POD and the amplification on the second.

Because the CQ-2200 can be controlled by a contact closure, installation is quick and requires no expensive accessories. Remote activation is very simple and convenient.

So, the CQ-2200 offers several attractive features in a very economical, easy to install and easy to use package. The CQ-2200 is available in an isolated ground version (CQ-2200-IG).