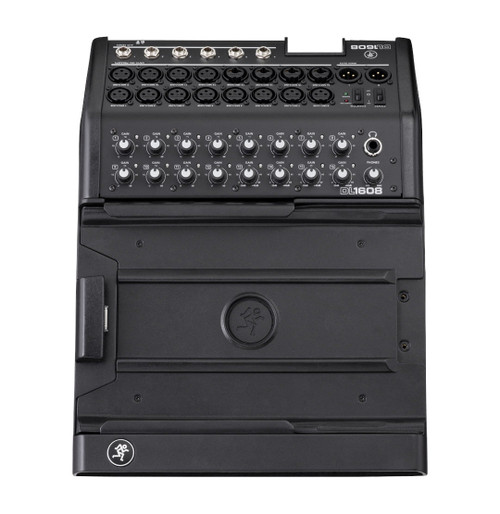 The Mackie DL1608 redefined live mixing by combining the proven power of a full-featured digital mixer with the unmatched ease and mobility of devices you already own. Seamless wired to wireless mixing allows control from anywhere in the venue giving you the ultimate control over your mix. Conveniently slide your iPad right onto the top of the mixer.

Ideal for bands, rental house and production/installations, the DL1608 provides the mobile freedom to wirelessly control the mix and powerful plug-in processing. With boutique-quality Onyx™ mic preamps and the performance of 24-bit Cirrus Logic® AD/DA converters, you have unparalleled sound quality. The Master Fader control app, the heart of your DL mixer, even supports up to 20 wireless devices. Forget bulky consoles and racks of gear, the power is at your fingertips.

Master Fader is the main user interface for your DL Series mixer. Rather than knobs, faders and buttons on a large piece of hardware, you get powerful mixing tools on your tablet, Mac, or PC and at up to 20 different devices simultaneously. The intuitive design of the Master Fader app makes managing your mix, large or small, easy and efficient. Organize your channels with view and mute groups, utilize subgroups with full bus processing, control levels of channel groups simply with VCAs, and even lock out devices from specific capabilities within the app. And when you get a mix you like, you can save it all into a snapshot.

From EQ to compression, every bit of signal processing is implemented with the highest quality possible maintaining the fidelity of each source. Every channel and output bus gets it's own dedicated processing.

The 4-band parametric EQ on each channel and output features a dedicated high-pass filter, modern and vintage modes, and built-in RTA for maximum versatility and detailed analysis of each source. The clear UI makes it easy to make adjustments, view settings, and choose presets.

Each FX processor features tons of studio-quality reverbs and delays plus effects like chorus, tremolo, flanger, and sweep filter. Fine tune each effect with advanced parameters and EQ.