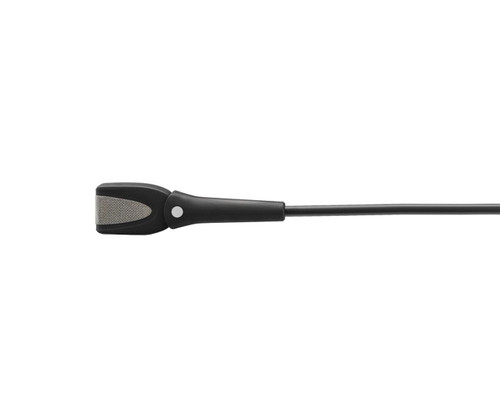 The Slim 4161 uses the same capsule as the 4060, delivering the same excellent sound in different housing. Already a flat and short mic, it becomes invisible when used with the included button-hole mount. Placed on the mic head, the button-hole mount has a small side entry pipe (2mm) making it possible for sound to enter through a button hole, or similarly, directly to the diaphragm. The cable runs perpendicular to the sound inlet, further minimizing visibility and ensuring easy mounting. Superior sound quality in an almost invisible presentation makes this mic a favorite among film and TV professionals, as well as anyone who wants their mic to truly not be seen.

Personalize the Slim 4161 mic by choosing from a variety of colors and connectors. This wireless lav mic uses CORE technology. CORE uses the same capsule as Legacy, and makes improvements in minimizing distorition and significantly expanding dynamic range up to 14 dB (capsule dependent). One connector option for the 4161 is a MicroDot termination, which enables the mic to be run with a wireless system. Use an adapter (sold separately) to connect your wireless system to the Slim 4161 lavalier.

The 4161 uses the same capsule as the 4060, which was the first miniature microphone developed by DPA. Using technology previously only found in hearing aids and measurement microphones, it reaches levels of 144 dB before clipping occurs. This ultra-tiny mic exhibits a highly accurate omnidirectional pattern, so it does not need to be aimed directly at the sound source to capture high-quality sound. The omnidirectional pattern also makes the mic less sensitive to pop and wind noise, making it great in applications with a remote or damped sound source.