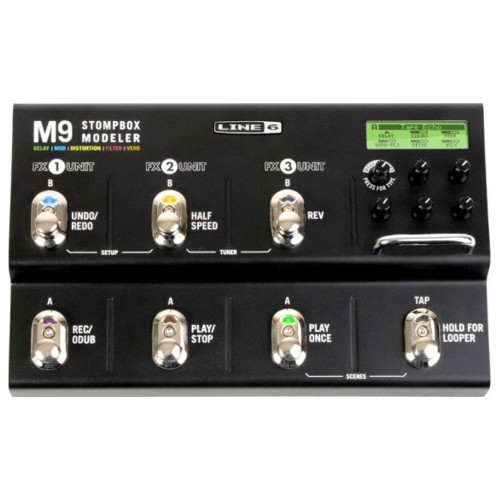 M9 Stompbox Modeler has the stunning stompbox tones, old-school simplicity and necessary portability you need in an all-in-one stompbox solution.

M9 Stompbox Modeler is three FX Units in one. Up to three effects can be used simultaneously, with three more at the ready. Use one effect at a time, arrange them into tried-and-true combinations or create your own original blends.

Different effect arrangements, or “scenes,” can be created for each of your gigs. No more tearing up Velcro® just to switch out one or two pedals! Create and save up to 24 scenes. (Scenes can be backed up to your computer via MIDI in/out.)

M9 Stompbox Modeler is easy to use, just like a classic stompbox. Tweak your tones on the fly using the dedicated knobs. No menus, no saving and no hassles. And your settings remain when you power down! The bright LCD shows parameter names/values and the built-in chromatic tuner.

The 28-second looper delivers extended, in-the-moment looping. Looping has never been easier with dedicated footswitches for Record/Overdub, Play/Stop, Play Once, Undo/Redo, Half Speed and Reverse. (The looper and the FX Units can be used simultaneously.)