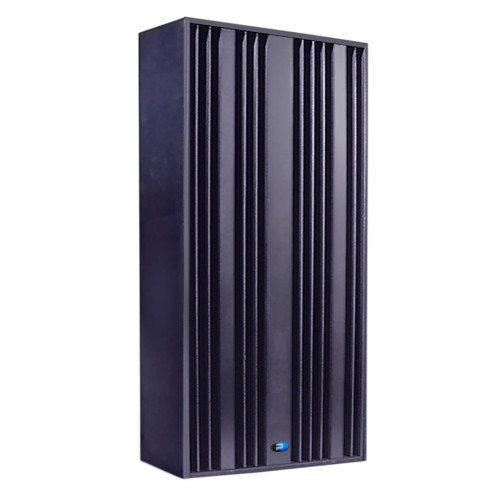 The Razorblade is a high-performance quadratic residue diffuser (QRD) based on a primitive root sequence that employs a grated array of 17 precisely calculated wells to break up and scatter acoustic energy to create a diffuse sound field.

Originally developed by Schroeder, QRDs have long been considered to be one of the most effective forms of diffusion. A series of wells are mathematically arranged in such a fashion that sound waves entering the device reflect back into the room at different times, thus shifting their relative phase. This produces both spatial dispersion (left and right) and temporal dispersion (time shift) which effectively eliminates flutter echoes, breaks up strong first order reflections, and reduces standing waves without overly deadening the space.

Unlike light-weight plastics that are unable to control powerful low frequencies, the Razorblade combines heavy, MDF slats with a furniture grade solid wood laminate surround for added mass and rigidity. The grated 24? x 48? array is made up with a series of 17 deep, narrow wells that will effectively diffuse acoustic energy from 425Hz to over 5.5kHz with excellent scattering down to 200Hz. This makes the Razorblade particularly effective in varients of the LEDE (live-end, dead-end) studio control room designs where several units are typically clustered across the rear wall, spanning the width of the work surface.

Once in place, the Razorblade creates a sense of air and space, giving the impression of being in a much larger room. This creates a more natural and comfortable working environment. The Razorblade is ideally suited for studio installations, soft seat theaters, high-end home theaters and performance venues.