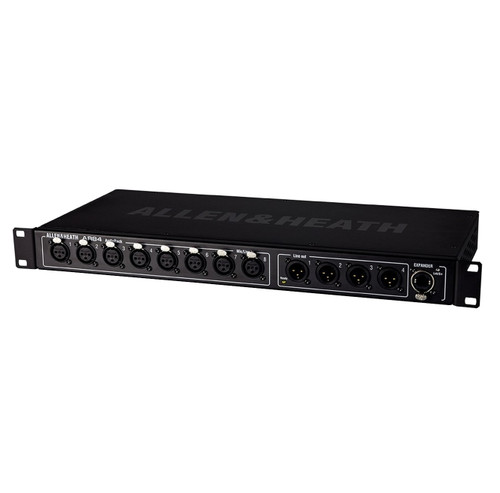 Give your creativity more space to spread out with Allen & Heath’s AR84 AudioRack Expander. Running on Allen & Heath’s dSNAKE protocol, the AR84 lets you connect I/O gear up to 100m (approximately 328 feet) away from the mixer, using a single Cat5 cable. This 48kHz AudioRack is compatible with Qu, Avantis, GLD, and SQ series mixers, as well as with the AHM-64 audio matrix processor (all sold separately).

Enjoy the freedom of expanded I/O with the AR84’s 8 remote-controlled XLR mic/line preamps and its 4 XLR line outputs. A built-in Monitor port allows you to connect to ME-1 personal mixers and supplies 40 channels of audio signals, and compatability with the Aviom® Pro16 monitoring system. Use the Expander connection to scale your options up even further by connecting an AR2414 or AB168 AudioRack for even more system I/O.

Packed with features that ensure your installed setup delivers optimal sound no matter what the venue, the AR84 utilizes an Ethernet protocol that provides control to the remote preamp and scene-recallable mic preamps. Keep your unit firmware effortlessly up-to-date with this AudioRack expander’s automatic update functionality. Included with the AR84’s wide range of connectivity options is a local Ethernet port/RJ45 socket with an EtherCon locking ring.

The AR84 boasts a rugged steel construction for long-term durability in installed applications. Its 19” chassis is 1U in height for simple rack-mounting. This AudioRack expander features a built-in power supply that accepts AC mains voltages of 100-240V, 50/60Hz, 20W max via the earthed 3-pin IEC male connector that’s mounted on the back of the unit. A designated switch is mounted near the main inlet to safely isolate your mixer from the incoming mains supply.