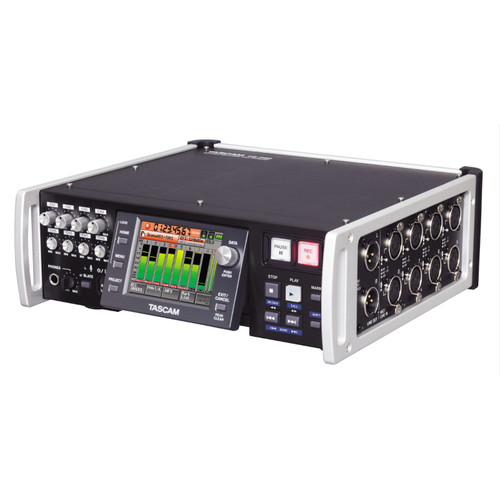 TASCAM's HS-P82 offers 8 tracks of the highest quality recording, yet it's built for the rigors of location recording with reliable solid-state performance. The HS-P82 is built for location television and film production audio, with eight microphone inputs for big shoots or reality programs.

Audio is recorded at up to 192kHz/24-bit WAV format to a pair of Compact Flash cards. This solid state media is completely reliable with no moving parts, and you can record to both cards simultaneously for extra security (card-mirroring). The Broadcast WAV files include iXML metadata for quick import into nearly any video or audio editing system, either via the USB 2.0 connection or a standard card reader.

For multi-microphone music or surround effects recording, the HS-P82 includes Mid-Side decoding – either recorded to the track or only for monitoring & playback. Microphone gain settings can be ganged together for input level control or fades, and inputs automatically mute when the gain is moved to its minimum setting.

TASCAM also provides firmware upgrades for products from time to time. The latest upgrade - V1.20 – provides the ability to rename takes and automatically start and pause recording in response to the state of an external timecode signal.

For high-resolution music recording, a set of AES/EBU connectors is available for attaching pedigree A/D converters and preamplifiers. SMPTE timecode in and out, video and word sync are provided. All of this is controlled from a color touchscreen interface which makes operation fast and simple.