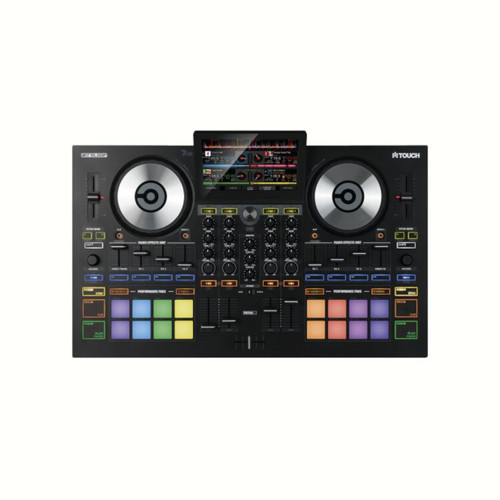 Reloop presents TOUCH, the world's first DJ controller with an integrated 7"-touchscreen. TOUCH was developed in co-operation with VirtualDJ and it runs plug and play after setup. A full version of VirtualDJ 8 PRO is included.

Thanks to the clear and bright display of waveform and track information, DJs have all important details concerning their music in their field of view. The touchscreen's integration opens up a world full of creative control possibilities including real-time control of FX via the XY panel, comfortable track browsing, organizing your media library via drag-and-drop, as well as visualization of the various performance modes. Video mixing can be played back in full screen mode, offering unique possibilities to support your set visually. Video clips can be assigned to both decks and monitored via the CUE function.

TOUCH is designed in a classic 4-channel club mixer layout and with a combined EQ/filter section. Via colour-coded deck switching, DJs will always know which deck is currently playing. The two deck sections are equipped with high-resolution jog wheels, which are perfect for pitch bending thanks to their special non-slip design. Two fader-FX units offer direct control over effect and video parameters via four short-throw linefaders each. The multi-functional XCoder controls various modes, combining three convenient functions (Loop Size, Key and Grid Adjust) to use with one encoder.

The 8 RGB performance pads are located below the respective fader-FX unit, offering a large number of creative mixing possibilities. As well as classic performance modes such as HOT CUE, ROLL, SLICER, SAMPLER, CUE LOOP, SAVED LOOP, BEAT JUMP and KEY CUE, TOUCH also offers PAD MODE, allowing you to switch between pad functions and SPLIT MODE, making it possible to combine up to two different modes at the same time. All performance modes can be adjusted extensively via the PARAM button.

TOUCH has a powerful built-in audio interface with high-retention USB port which is especially sturdy, protecting you from unwanted cable pull-outs. As well as both balanced and unbalanced master outs (TRS/RCA), there are two headphones connections (3.5 and 6.3 mm) and a mic input connection (6.3 mm). Moreover TOUCH is fully MIDI compatible with other DJ and audio software.