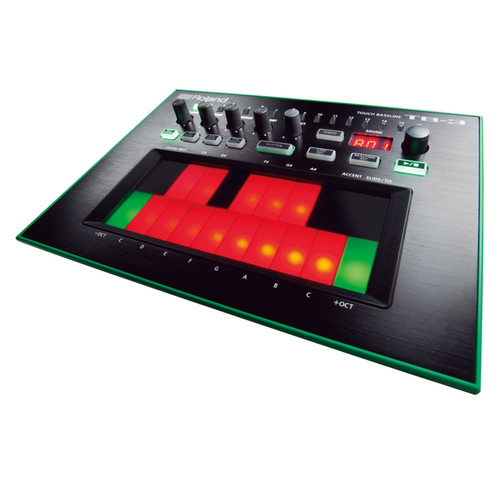 Based on the wildly influential TB-303, the new TB-3 Touch Bassline is a performance-ready bass synthesizer with authentic sound and intuitive controls engineered to play. The TB-3 contains the unmistakable character of its predecessor, wrapped in a modern package with a pressure-sensitive touch pad that makes both playing and programming a total joy.

Using Analog Circuit Behavior (ACB) technology, Roland fully reproduced the TB-303’s sawtooth and square wave oscillators, as well as the -18dB per octave ladder low-pass filter used in the original, capturing that unmistakable cutoff and resonance character. In addition to the faithful reproduction of classic TB tones, the TB-3 is packed with new sounds that live and breathe. Bubbling synth basses, hard distortion basses, trippy delay sounds, and drippy effects—they’re all here, and then some.

The new TB-3 is equipped with a brightly lit, pressure-sensitive touch pad that lets you seamlessly create patterns and interact with the unit during performance. In addition to pitch and volume, you can tweak filters and even control modulation by simply pressing down on the pad with your finger. It also makes the keyboard a breeze to play.

The TB-3’s evolved step sequencer is a snap to use and allows seamless switching between pattern creation and performance. A favorite aspect of the TB-303 was how it would sometimes generate unintended sounds as the user maneuvered through its complex and cryptic pattern-creation operation. In order to inject that element of chance and discovery, the TB-3 includes automatic pattern generation and random pattern modification functions.

The TB-3’s Scatter function features slicing, reverse, gating, and other effects, allowing you to instantly create variations, stutters, and glitches that would normally require painstaking editing in a DAW. Complex, per-step functions are triggered easily with the touch pad and a single finger. You can keep things fresh and interesting with 8 different Scatter variations and 10 levels of Scatter depth—all controllable in real time and in perfect sync.

The TB-3 looks great, and is designed to work seamlessly with other products in the AIRA series. In addition, you can connect the TB-3 to your computer via USB to send and receive both audio and MIDI data, including MIDI clock information for syncing with external devices and other AIRA units.