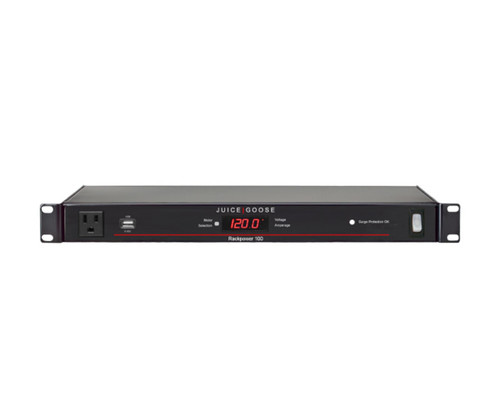 The Rackpower 100 is a premium grade power distribution unit for musicians and audio professionals. In addition to exceptional quality, the RP100 features several valuable features:

- One USB port is provided on the front and one on the back of the chassis. These five volt DC connections are usable for utility lighting or powering accessories. Connect an inexpensive, flexible USB light fixture for lighting in the front or back of the rack. Both USB ports can also be used to charge accessories including an iPhone or iPad.

- One AC outlet is located on the front. Nine are on the back. The rear outlets are rotated to accommodate wall warts and include extra generous spacing between four of them. Model RP 100-20A includes a single NEMA 5-20R, rated for a twenty amp load.

- Surge protection is provided with a triple arrangement of fast response, metal oxide varistors between line and neutral. An indicator LED on the front panel shows the protection is in place and functioning. Should that LED go out, the LED package can be replaced easily at a nominal cost.

- This professional grade, ten inch deep enclosure is formed from a single piece of cold rolled steel. Reinforced mounting brackets and a flush mount top complete a package that's been used to rack mount other products weighing over 200 pounds. The extra chassis depth allows easy access to the rear receptacles while mounted in a rack.