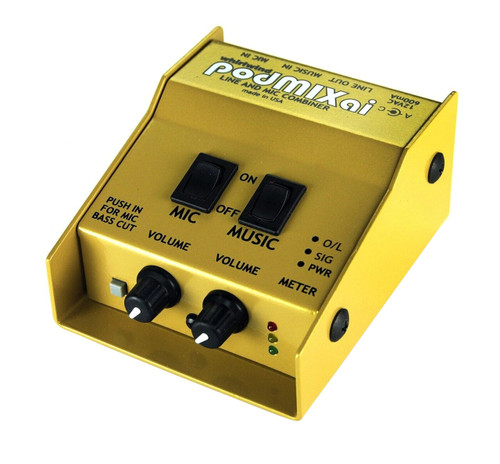 The podMIXai is an active mixing device that combines a dynamic microphone with an unbalanced stereo audio source for connection to a single line level input of a sound system. Use it with CD and MP3 players, computer sound card outputs, DJ mixers, etc. along with a microphone in sports arenas, conference rooms, banquet halls, gymnasiums and party houses for paging or announcements over background music. The output is mono balanced line level.

The podMIXai is a small tabletop enclosure with a rugged, ergonomic design for ease of use and easy storage. A wall adapter power supply (PS12AC1A) is included which provides 12 VAC at 1 Amp.

Variable level controls on both the mic and music inputs allow level matching and mixing between the music source and the microphone. The mic input accepts dynamic microphones and can provide up to 60 dB of gain. The music input can boost the signal 20 dB.

On/Off switches for both the mic and music inputs allow convenient muting control of each signal. A bass cut switch is provided on the mic input which can reduce handling and wind noise.

The LED meter has yellow and red LEDs that confirm output level and a green LED indicates that the podMIXai has power . The yellow starts to illuminate when the output signal reaches -10 dB and the red starts at +10 dB and is fully on when the signal reaches +16 dB.

Music signals are input via a single 3.5mm (1/8”) stereo TRS jack which are summed to mono. The microphone input is a balanced female XLR jack and the output is via a balanced male XLR jack.