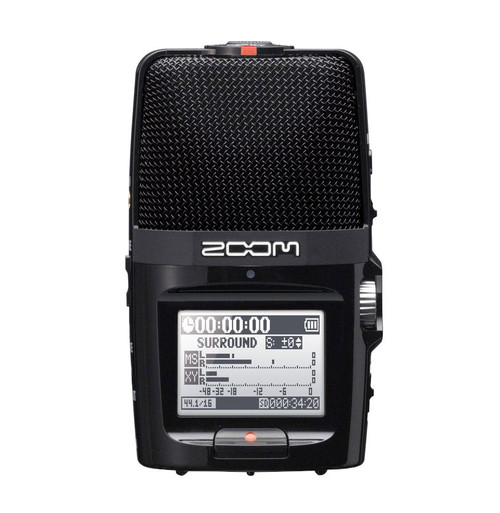 Filled with power that exceeds expectations for a portable recorder, the H2n has 5 built-in microphones and 4 recording modes: X/Y, Mid-Side, 2-channel surround, and 4-channel surround. Two microphones are configured in an X/Y pair, and the remaining three are used in a Mid-Side (MS) pattern. These features make the H2n great for live concert recording, location videography, and other audio production uses.

The microphone set-up perfectly matches the corresponding recording mode. Mid-Side is recommended for film, video, and television projects since you can adjust the stereo image width after recording without influencing mono compatibility. X/Y creates a natural-sounding stereo, excellent for gathering sounds from a wide area while sources in the center remain clear and focused. Surround sound modes combine both microphone types for a truly immersive sound capture; 4-channel surround provides spatial audio for VR and other 360-degree experiences.

The H2n recorder has a host of advanced features, such as automatic gain control and onboard MS decoding. Popular effects include compression, limiting, and low-cut filtering. There’s almost no chance of missing a candid moment thanks to pre-recording and auto-record functions. The H2n has a data recovery feature that repairs corrupted files automatically.

Record long sessions without worry: the H2n uses 2 AA batteries (sold separately) and can run for more than 20 hours of continuous recording. The H2n records directly to SD cards. Both WAV and MP3 audio formats are supported with the H2n, and you can convert WAV files into MP3.

Work the H2n into your current gear for additional uses. A 1/8” mini phone jack line-in can accept two channels of mic/line-level signals, such as a condenser mic that requires 2.5 volts of plug-in power. Connect headphones using the stereo 1/8” phone jack line out with dedicated volume control. Repurpose the H2n as a USB microphone or send data to and from a computer via the USB port.