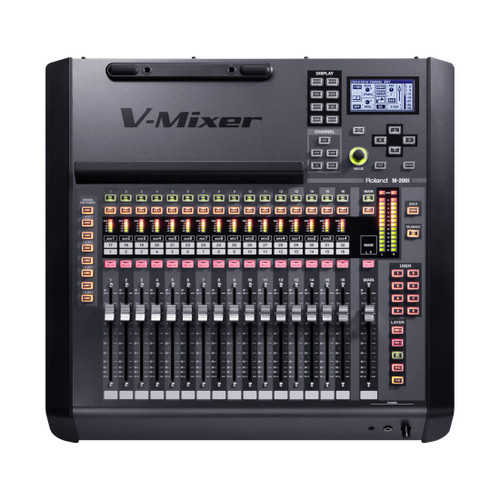 The M-200i 32-Channel Live Digital Mixing Console from Roland is a V-Mixer with 24 analog inputs, 12 analog outputs, and stereo digital output (AES/EBU), all built-in to the main unit and it is ready to perform out of the box. It can be used in sound reinforcement applications such as rehearsals, live stage, theater, houses of worship, and more.

The M-200i features 17 motorized faders, dedicated buttons and knobs for key functions, and can interface with an iPad (sold separately) as a large touch screen display. Use the iPad for intuitive control of effects and other graphical manipulation, while physically controlling the volume with the motorized faders.

In addition, the M-200i incorporates a built-in REAC port that allows you to expand using any other device from the REAC family including Personal Mixers and/or Multi-channel Recorder/Player technology (sold separately).