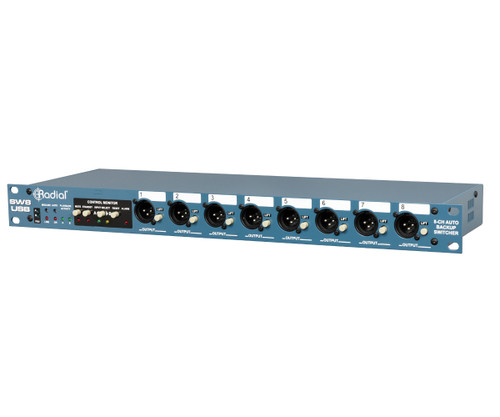 The Radial SW8-USB is a streamlined solution for employing redundant playback systems on stage, with dual USB inputs that allow you to connect directly to your primary and backup computers, providing eight channels of high quality audio and peace of mind during a live performance.

The SW8-USB is the complete solution for performances that utilize redundant playback systems for backing tracks, combining two built-in high performance USB interfaces with an auto-switching feature that detects dropouts and effortlessly switches to the backup computer in an instant. Dual USB inputs with separate 24bit/192kHz converters allow two computers to be connected in tandem, so digital workstations on both machines can connect to the SW8-USB as an audio and MIDI interface. Start/stop synchronization is also possible between both computers through MTC, ensuring flawless switching between playback rigs with less equipment than ever.