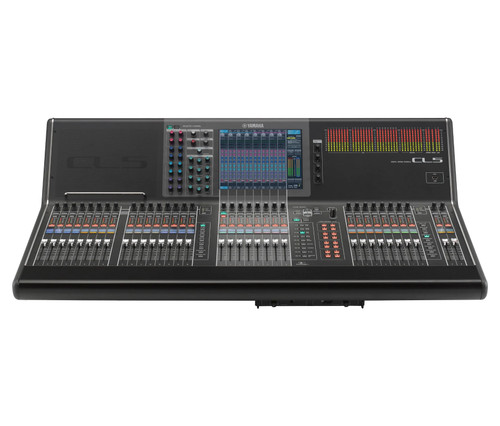 Yamaha’s CL series takes the best of industry standards and offers evolutionary refinements. The CL series digital mixing consoles are known for providing accessible mixing and sonic purity with unprecedented creative freedom in sound-shaping capabilities. The CL5 provides a large option with 72 mono and 8 stereo input channels in a 3-section fader layout. This size is popular for a variety of live sound systems.

Sound quality is considered in every detail of the CL5. AD and DA conversion performance was maximized, going so far as making spectral analyses of the AD/DA master clock and adjusting the FPGA clock signal routing. There are many high-quality signal processors, including Portico 5033/5043 EQ and compressor devices that join Yamaha’s VCM technology with the renowned Rupert Neve’s. Low impedance in the power supply helps provide a completely natural representation of the input signal.

With the CL5 you get the benefits of digital mixers and the acclaimed quality of analog. Rupert Neve Designs recognized Yamaha’s VCM (Virtual Circuitry Modeling) technology is capable of accurately modeling the rich and expressive analog sound that Rupert Neve Designs is known for. VCM technology delivers both accuracy and musicality, simulating the most minute details of individual circuit components.

Many creative options are supported by the Premium Rack and Effect Rack. The Premium Rack can host up to 8 instances of the 6 expressive EQ and dynamics effects provided. The Effect Rack offers more than 50 effects; up to 8 of those effects can be used simultaneously. A GEQ rack also allows graphic EQ to be inserted into the output buses for room EQ and other functions.

Yamaha’s Centralogic concept is the core of a user interface that is more efficient to operate than ever before, offering user-friendly visual feedback, a familiar layout, and tactile details such as non-slip inserts on faders. One example of a Centralogic-supported function is the ability to save up to 300 complete console setups as scenes and instantly recall them as needed. The CL5 can also be operated remotely or offline via an Apple iPad® or computer.

Network capabilities are key, and the CL5 meets that demand with separate console and I/O rack components that communicate via Dante protocol. Several CL series consoles can share control over the same I/O rack unit. Lake® processing can also be added via expansion slots. Three Mini-YGDAI card slots are available for I/O expansion. These features make it easy to adapt and expand the CL5 as your mixing needs change.