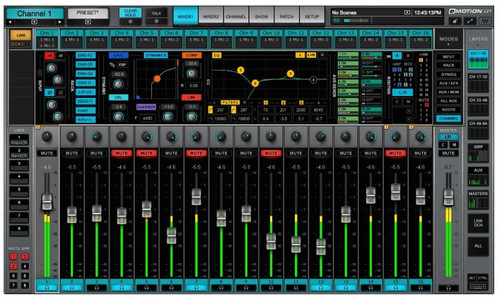 Waves eMotion LV1 is a revolutionary live digital mixing console that provides real-time audio mixing for front-of-house, monitor and broadcast engineers. Based on SoundGrid technology, this software mixer delivers the superior sound quality for which Waves is renowned, as well as the convenience and speed needed in demanding live environments.

eMotion LV1 gives you unprecedented control over every aspect of your live sound. Each of the mixer’s channels has its own plugin rack capable of running up to eight SoundGrid-compatible plugins. This means you can mix live with hundreds of your favorite plugins—all running inside the mixer itself. All plugin presets and chains saved in eMotion LV1 can be shared with the Waves MultiRack and StudioRack plugin hosts, enabling you to move seamlessly between live and studio environments.

The mixer’s channel strip—its standard EQ, filters and dynamics processing—is provided by Waves eMo plugins: eMo D5 Dynamics, eMo F2 Filter and eMo Q4 Equalizer. All three are designed for maximum clarity and efficiency in a live environment. All three are included with the eMotion LV1 mixer. The LV1 also integrates smoothly with the Dugan Speech automixer plugin (purchased separately), which is easily accessible from each LV1 channel.