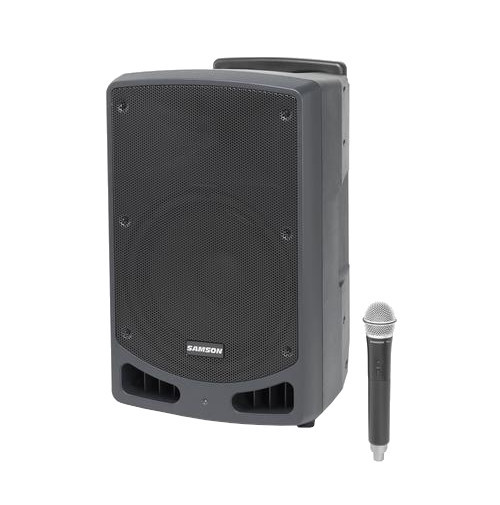 The Samson Expedition XP312w Rechargeable Portable PA answers the call of those who need great-sounding mobile audio. With 300 watts of power, 12 hours of battery life, a 4-channel mixer and Bluetooth, the XP312w delivers huge sound to musicians, DJs or those enjoying a variety of outdoor events. It also includes a frequency-agile wireless microphone for cord-free performance.

The XP312w operates for up to 12 hours continuously via its built-in rechargeable lithium ion battery. Its lightweight Class D amplifier delivers 300 watts of power to a 2-way speaker system with a 12" woofer and 1" tweeter. This is all housed in a rugged polypropylene enclosure with a steel grille that weighs just 38 pounds. And with a retractable handle and smooth rolling wheels, transporting the XP312 is as easy as it gets. Plus, a 1 3/8" speaker stand receptacle allows the XP312w to be mounted using any standard speaker stand.

Equipped with a 4-channel mixer that includes XLR, 1/4" and 1/8" inputs for connecting microphones and line level devices, the XP312w makes for quick and easy setup. The speaker can also stream music wirelessly from any Bluetooth device. A variable reverb control adds depth, and a voiceover ducker automatically lowers the music when speaking or singing into a microphone (XLR or wireless inputs). In addition, a master 2-band EQ is provided to adjust the tonal characteristics of the XP312w, as is a line output to daisy-chain additional speakers.

Perfect for multi-performer vocal and speech applications, the XP312w is capable of handling up to three wireless systems simultaneously. The XP312w comes with a single Concert 88a Handheld Frequency-agile UHF Wireless System that offers up to 300' of operation. An extra wireless receiver slot is included for adding a second Concert 88a Series wireless system (sold separately), while the USB wireless port allows you to also integrate an XPD Series USB Digital Wireless System (sold separately).