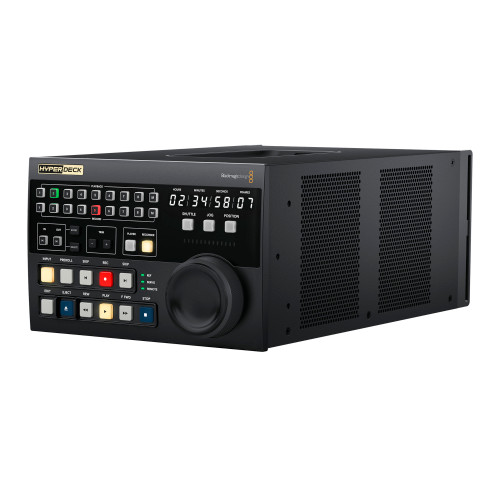 The HyperDeck Extreme Control works like a traditional broadcast deck, even with a familiar layout. Built-in editor can be used for automating the ingest of legacy videotape based programming. Complete with transport control buttons, timecode, deck status, plus a large search dial with electronic clutch for jog, shuttle and positioning. RS-422 ensures compatibility with most decks and you can edit between different video standards.

Two rows of buttons on the top of the control have 8 buttons for recorder selection, 8 buttons for player selection. Built-in remote control router allows multi deck work with 8 ports to control up to 8 HyperDecks.

Design is a blend of traditional decks and the HyperDeck Extreme. Buttons are available for rewind, fast forward, stop, play, record, eject, input, plus a pre-roll button for cueing the tape. Premium search dial for jog and shuttle and an electronic clutch stops the knob at the end of the shuttle travel or allows free spinning when in jog. Full deck status is included and timecode is clearly displayed.

To edit select the IN or OUT buttons and the ENTRY button simultaneously. Edit points can be trimmed. Pre-roll button is included to instantly cue decks to five seconds before the IN point.