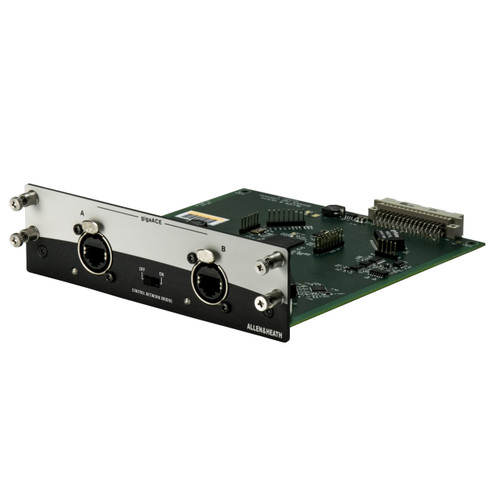 Get the versatility and enhanced functionality you need so you can achieve the highest quality of sound you want with the gigaACE dLive Audio Networking Card (M-DL-GACE) from Allen & Heath. One of multiple audio networking options provided by Allen & Heath to fit any dLive or Avantis I/O port, the M-DL-GACE delivers 128x128 channels (at 96kHz) gigaACE point-to-point link to another dLive or Avantis mixing system. This networking card also makes it possible to connect a dLive system to the DX Hub or GX4816 expander (all external components sold separately).

Using plug-and-play protocol, gigaACE does not require any computer for setting up its connections. Simply connect it to a standard CAT cable between any two dLive and/or Avantis systems, then set the patch and clock settings directly from the mixer’s user interface.

The M-DL-GACE equips you for transporting Audio and Control over Ethernet. It minimizes latency and enables cable redundancy, all without any audio dropout. This card can tunnel dLive/Avantis TCP/IP control networks over the same connection (such as controlling either of the two systems via one laptop).

The gigaACE card gives you an affordable and easy-to-use option for digital split applications, such as FOH and monitor configurations where the inputs of a dLive or Avantis system are sent to a secondary system where independent trim, processing, and mixing are applied.