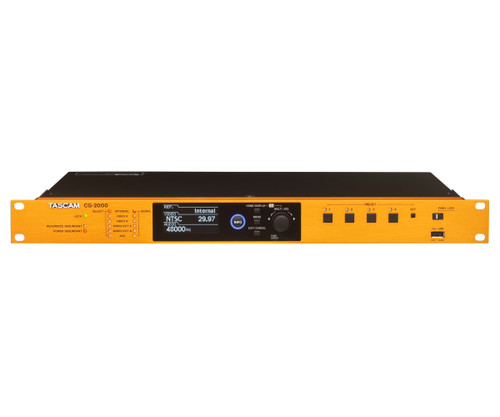 With redundancy of both the power supply and the video/audio clock, as well as many other functions, the CG-2000 meets the strict demands of broadcasting and post production.

The CG-2000 employs a high-precision OCXO (oven-controlled crystal oscillator) that boasts a clock frequency precision of ±0.01ppm*1 and a frequency stability of ±0.005ppm per day. In addition, the CG-2000 is equipped with an external input connector that supports a 10MHz signal, allowing it to be connected to a rubidium clock or GPS clock, when possible, for even higher precision for the system. The jitter management circuit developed by TASCAM reduces external clock jitters, enabling a stable clock signal to video and word outputs, while a glitch-free relock circuit maintains a sustained clock phase even during clock dropouts and recovery, thus effectively preventing noise and skipping from occurring, delivering high reliability and stability to users.

The CG-2000 comes equipped with 4 video outputs. All series include 12 word clock outputs, two AES3/11 and two/PDIF digital outputs, enabling the construction of large-scale synchronization systems. Furthermore, it is compatible with 2×Fs, 4×Fs, and 256×Fs outputs, as well as Pro Tools and other DAW systems. The CG-2000 is developed so that the cause of any malfunctions can be investigated during maintenance when problem occurs. The termination of output equipment, measuring of the input level, and the analyzer function that measures input frequency are all included, supporting troubleshooting should a problem occurs. The word clock’s output level can be adjusted to different levels, allowing for optimum signal levels to be supplied to connecting equipment. As another function that supports the detection of problems, a logging function is also included.