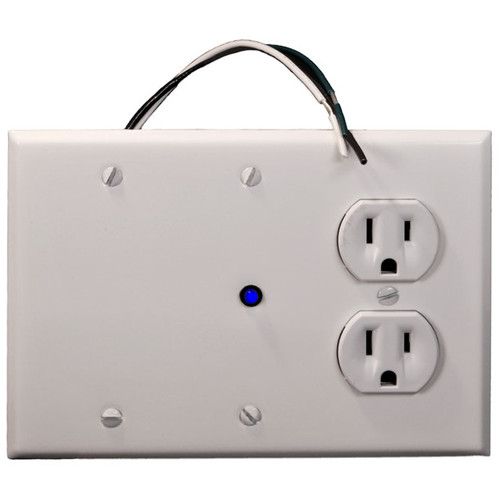 The CQ-1 is a great in-wall extension of the CQ product series. It functions just like the other CQ models with plug-and-play simplicity. It fits in a three gang box. The fifteen amp duplex turns on with a single sequence event. A utility box is supplied with the unit. But, any standard three gang enclosure is sufficient. Like other CQ models the CQ1 has a sequence signal line Input and Output port to allow it to be daisy chained with any number of other CQ devices.

Application Example
With the CQ1, AV installations can be designed without racked equipment and controlled with a simple wall mounted key switch. Here is an example of a sound system using a mobile FOH installation and powered speakers. One CQ-1 module controls the mix location. Two more modules control the powered speaker clusters.

The increased popularity of powered speakers has created a need for distributed power control. Qiwi fills that need with an aesthetic and economical option for new or retrofit installation. The metal face plates are available in black, white and ivory.

The CQ 1 consists of a front plate, duplex receptacle (NEMA 5-15R) and power control circuitry all installed in a metal enclosure which fits in a standard two gang spacing. A third gang space is required for power line connection. For installation convenience, the CQ 1 ships with a plastic, three gang wall enclosure. Any standard sized, approved three gang enclosure can be substituted as needed.

After main AC power is attached to the CQ 1, use the eight wire RJ-45 style CQ signal cables connected to the Input and Output connectors on the CQ 1 enclosure to link the CQ 1 to any number or configuration of other CQ Series products. Then fasten the assembly into the three gang wall box. That's it!