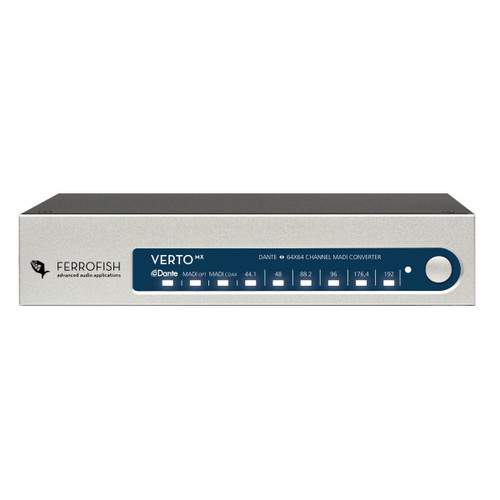 Dante is the de facto standard for networking audio equipment. With the Verto MX it's now possible to easily integrate your existing beloved MADI equipment into a Dante network. Whether mixer or MADI converter - the Verto MX makes all 64 x 64 MADI channels immediately avalilable in the network: "plug and play".

The ultra compact device has two MADI interfaces, so both optical and coaxial equipment can be connected. If the MADI signal fails, the other interface is automatically switched so that secure redundant operation can be configured.

On the Dante side there are two RJ45 sockets, also prepared for redundant operation. The Verto MX supports up to 192kHz sample rate, MIDI jacks for control, and BNC wordclock jacks for external synchronization.