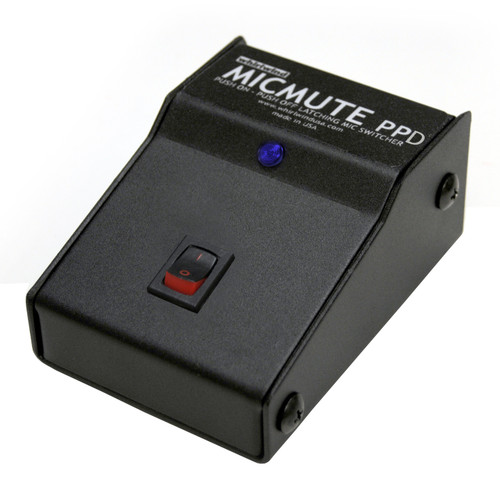 The Whirlwind Micmute boxes offer passive switching solutions for controlling the on and off conditions of a microphone or balanced line signal via footswitch or finger switch operation.

Each box has a female XLR input and a male XLR output jack. When no signal is passing through the boxes, the output jack is configured to mute the input of the connected audio device. All styles of MicMute will pass phantom power for use with condenser type microphones.

The Micmute PPD is configured as a latching Push On; Push Off switch, meaning that the switch must be pushed and released to turn the signal on or off through the box. Each time the switch is toggled, the signal is changed from one condition to the other. The PPD has an indicator LED feature that is operational when the connected microphone preamp input is providing phantom power. The blue LED illuminates to indicate that the mic is live and signal is passing through the Micmute box. The LED is not functional when phantom power is not present. The Micmute PPD uses an indicating rocker switch, which displays a red bar when the signal is turned on.