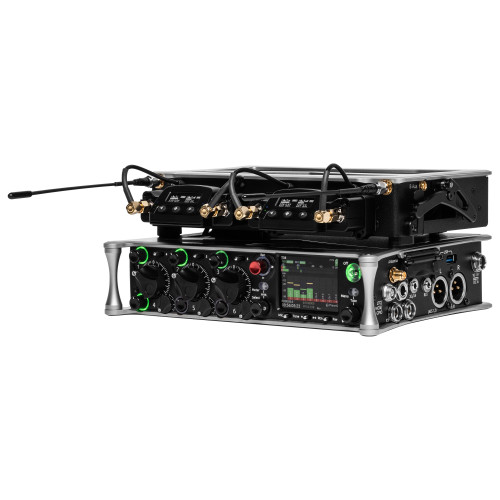 Streamline your bag with the SL-2 Dual SuperSlot Wireless Module. This two slot-in wireless receiver integration system easily mounts to the top panel of any 8-Series mixer-recorder. UniSlot and SuperSlot™ wireless receivers from a variety of manufacturers are accepted, including Audio Ltd, Lectrosonics, Wisycom, and Sennheiser. The SuperSlot protocol supports up to four channels of wireless audio per slot.

An 8-Series mixer-recorder supplies power to the SL-2 and slotted-in receivers – no external DC connector needed. Analog or digital audio is sent from the receivers into the mixer-recorder via the expansion port, reducing messy cabling for power and audio connectivity. The SL-2 offers antenna distribution to slot-in receivers, spreading out the placement of antennas for better RF performance. The rear panel of the SL-2 is equipped with two TA3 connectors for an additional four inputs of AES3 audio and two 4-pin Hirose DC Outputs, each supplying up to 500 mA for powering additional equipment.