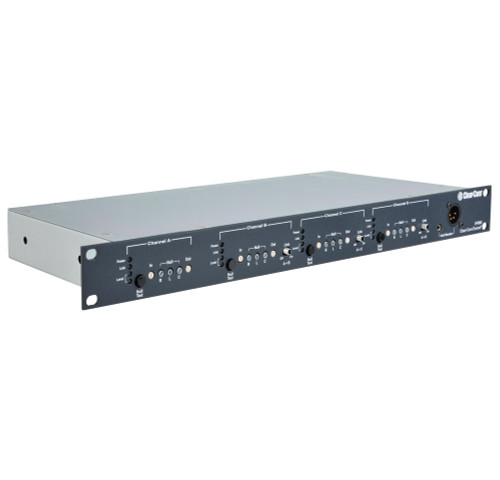 The IF4W4 modular 4-wire interface connects camera intercoms, two-way radios, ber-optics, and other 4-wire devices to a standard Clear-Com intercom line. The 1-RU chassis holds up to four individual interface modules, each with its own 4-wire terminal block and XLR-3M connector to interface with Clear-Com. The IF4W4 accepts balanced or unbalanced 4-wire input and is transformer isolated. It is powered by the Clear-Com intercom line, using standard two-conductor shielded mic cable.

Front-panel controls allow the user to adjust the operating parameters for each interface module, optimizing the interface between the 4-wire device and the party line. Capabilities include: adjusting the transmit and receive levels between the intercom system and the 4-wire line; optimizing the hybrid null balance; switching the transmit level between mic and line level; and emulating either a carbon or a dynamic microphone. A two-color LED transmit-level indicator gives a visual indication of send levels to the transmit lines. A front-panel test jack is connected to a built-in oscillator. Using the null control and an earphone with a 1/8” plug or 4-pin headset, the user can quickly null the send/receive hybrid. Set-up switches allow the user to assign the interfaced devices to separate intercom channels, or to assign any or all to a single party line.

Each interface module has its own set of transformer-isolated connectors. The terminal block provides a pair of connections for both transmit and receive signals, with a 600-ohm load across the receive line. An XLR-3M connector provides the link between the interface and the Clear-Com intercom line.