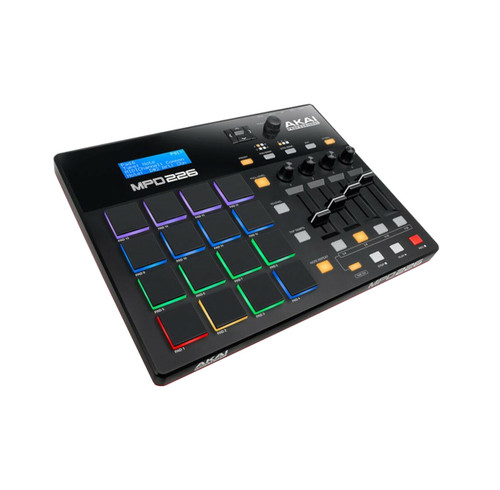 The MPD226 from Akai Professional is a MIDI-over-USB pad controller that combines intuitive MPC controls with easy USB connectivity. Ideal for producers, programmers, musicians, and DJs alike, the MPD226 brings the feel of classic beat making into the world of computer music production. The perfect bridge between creativity and technology, this controller is packed with features and software compatibility to give you versatile, intuitive, and almost limitless control over your sound.

Akai Pro’s MPD2 Series stands on the shoulders of its beloved predecessor, their MPDs. After over six years of thorough and thoughtful research, and taking careful account of the feedback of their customers, the result is a fully enhanced, next-generation line of pad controllers that boast improved controls, intuitive MPC pads, and updated bundled software.

The first thing you’ll probably notice with the new-and-improved MPD226 is its optimized controls. The ultra-sensitive and hyper-responsive Thick Fat MPC pads are backlit to make your performance a more dynamic and intuitive experience. Akai Pro took the MPD26’s 12 controls and expanded it to a set comprised of 4 knobs, 4 faders, and 4 buttons arranged in 3 banks for a total of 36 controls that enhance your ability to manipulate effects and maximize your sound.

Another high-priority feature included with this second iteration of the MPD series is fully updated software and functionality.  Akai Pro added iOS compatibility, using the Camera Connection Kit (sold separately) as well as free onboard software (of over $400 value) including MPCS Beats, Big Bang Drums, and Big Bang Cinematic Percussion from Sonivox. Also included is Ableton Live Lite software and Software Preset Editor.  Software Preset Editor allows you to intuitively edit from the MPD226’s front panel, without needing to transfer your attention to your computer. Additionally, the MPD226 is upgrade-ready for Akai Pro’s critically-acclaimed software, MPC 2.0.

The MPD226 includes everything you need for simple, fast connectivity, making it the perfect bridge between your creativity and computer-based studio setup. Plug-and-play using its USB interface and included USB cable to connect to a PC or Mac, eliminating the need for installing any drivers.