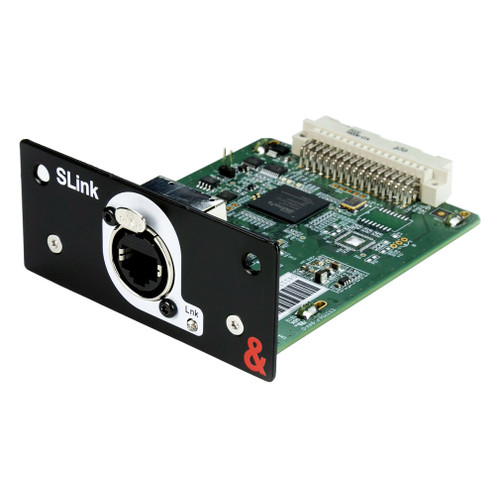 Take your sound setup to the next level with the SLink SQ Audio Networking Expansion Card (M-SQ-SLINK) from Allen & Heath. One of several audio networking option cards that are specifically designed to fit the SQ mixer from Allen & Heath, the M-SQ-SLINK comes with a single intelligent SLink socket and delivers up to 128x128 channels at 48/96kHZ operation. This SQ audio networking expansion card is a great tool for sound engineers, providing you with the option to add another intelligent SLink port to any SQ mixing console.

Once added to your mixer, the SLink card acts like any fully built-in port, resulting in the ability to connect a further 128 inputs and 128 outputs of digital audio, while also expanding your SQ system’s potential. This card boasts a low latency of 52μs, Auto adapting up to 128 channels, bidirectional, point-to-point, proprietary L2 Ethernet, plug ‘n play protocol, and many more features.

This option card runs independently from your built-in SLink port, which enables you to use two different Allen & Heath protocols in one system simultaneously. Combine an SQ with any Me personal monitoring, system, DX (32x32 channels at 96kHz), or dSnake (48x64 channels at 48kHz) expander (all external equipment sold separately). This card also supports gigaACE (128x128 channels at 96kHz).

Fitting any SQ console with an SLink card also makes it possible to directly connect to another Qu, SQ, or dLive system, offering nearly endless possibilities for applications such as digital FOH/monitor splits, broadcast feeds, and much more. Use a Cat5e (or higher) cable point-to-point with the SLink’s Ethercon connectors to place your sound setup’s components up to 100m (109 yards) away from each other. The SLink automatically adapts to whatever device it’s fitted to, converting sample rates between 48khz<>96Khz. This card also supports gigaACE (128x128 channels at 96kHz).