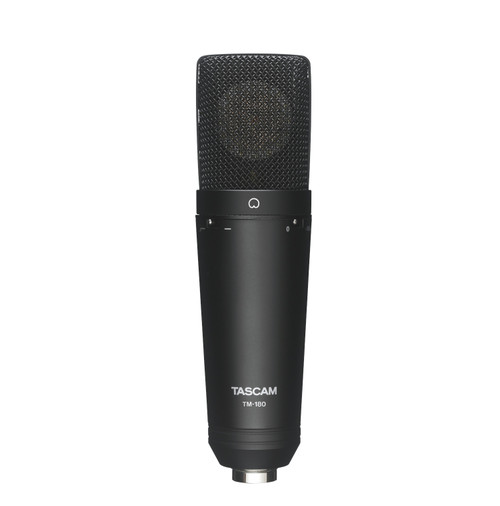 The more you know the tone of the condenser microphone, the more fun it gets! TASCAM TM-180 is the standard model in the TASCAM microphone series that have been tested with the TASCAM products, specialized in the bright sound quality with a large-sized diaphragm. In addition to this, the product includes a professional-use suspension to avoid noise mixing due to the microphone vibration during recording.

TM-180 is a condenser-type microphone, which is quite different from the dynamic microphone usually used in live performances. The diaphragm operates due to the pneumatic vibration. Inside of a dynamic microphone, the voice coil operates with the diaphragm, which increases the weight of the entire part. On the other hand, the condenser microphone incorporates a diaphragm in the either side of the electrode in an electrical part referred to as condenser, realizing a lightweight structure. This allows excellent follow-up performance, greatly contributing to high-precision sound. Thus the mechanism to convert into electrical signals is completely different between the two: the dynamic microphones are powered by electromagnetic induction to obtain electrical signals, whereas the condenser microphones take out the potential difference between the condenser electrodes as a signal. To give the condenser the electric potential difference, power supply is required.

TM-180 applies a large size, 34mm pure gold-coated diaphragm, and it is often characterized by its bright sounds. The frequency response of TM-180 shows a distinct curve at 1kHz or higher, and has a loose peak especially around 9kHz. By these characteristics, TM-180 acquires a clear outline in the recording of lead instruments as vocal or sax, for a strong, standout sound.